Letters such as this that I received from Trevor Cragg, my student at National Academy of Osteopathy makes me the happiest teacher in the world!

“The level of energy, enthusiasm and passion that you bring to the science and craft of Osteopathy is both extraordinary and radiant. It is an honor to be taught and mentored by such a strong and positive influence in the field! Happy Birthday!”

Posted by National Academy of Osteopathy at 6:22 PM No comments:

A Testimonial from a graduate of National Academy of Osteopathy:

Lots Of Gratitude And Appreciation. I have been practicing Osteopathy for about 5 months now and have been almost fully booked from the second month.

It makes me very happy to be able to help people become naturally pain-free and balanced and improve their health and well-being.

With the knowledge I acquired at NAO I have been able to live a lifestyle that I enjoy and create a beneficial balance between self-care, serving the society and ethically earning a proper livelihood.

I am enormously thankful to NAO's caring professional team and faculty and strongly recommend their programs. 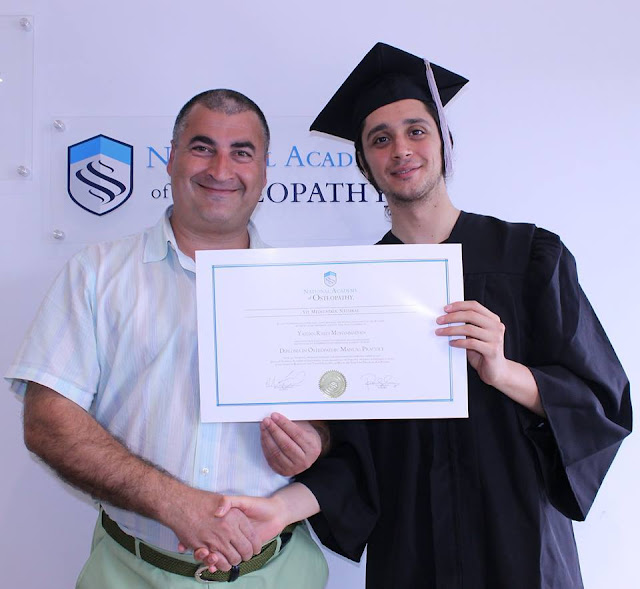 Posted by National Academy of Osteopathy at 5:11 PM No comments:


Canada has a new prime minister!
Congratulations goes to honorable Justin Trudeau for becoming one of the youngest prime ministers of Canada. 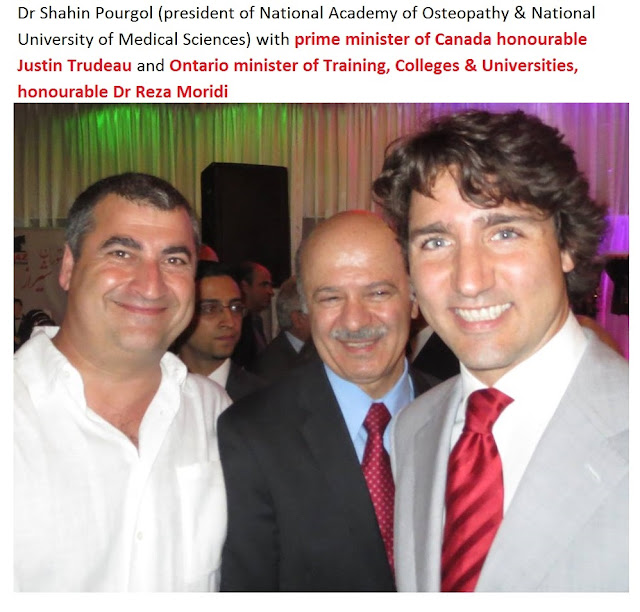 Posted by National Academy of Osteopathy at 6:04 AM No comments:


A beautiful poem by National Academy of Osteopathy student, Dr Chris Vincent, MBBS (October 19, 2015, Toronto, Canada). Dr Vincent aside from being a physician is also a distinguished artist.


Cobra Head.
A hockey helmet grill.
The sacred shield of the pelvis,
dressed up in a costume
with a gleaming cape
of lumbosacral fascia
and rabbit ears
of erector spinae.

An eight-eyed moth
beating its ilium wings,
moving and still at the same time.
Rami of sacral nerves
enter the foramina
like salmon
swimming upstream.

A large strong bone
shaped
like an inverted triangle
tearing the body into  two lower limbs.
A shiny rock dividing a flowing river.
The keystone
of the pelvic girdle
infused with healing energy
from the touch of
the osteopath.

A bone rocket
blasting off into space,
towards the dome of the diaphragm
spewing thick opaque smoke
of ligaments and tendons
billowing in all directions.

The vertebral hat wearing Mayor
of pelvis-town,
playing pied-piper to the spinal bones,
leading them south
away from the skull,
with loud music
blasting
from his coccyx-trumpet,
as he performed a dance
of nutation and counternutation.

Blurred image of a regal lion
with a flowing mane of iliacus,
piriformis and gluteus maximus,
sets the backdrop
of the Klondike stampede,
as muscles and vessels
rush between the moist terrain
of hollow cavities,  organs
and visceral folds
individually
and in groups
to reach the lower abdomen
in search of  gold:
the invisible center of gravity,
elusive
as a Tasmanian tiger.

Time stands still
as the past, present and future
exist together in harmony
inside the hollow
of the sacral canal,
becoming a tangled rope of possibilities
expressed in silence
via the hiatus.

A wild-boar
with sacral ala ears
and jagged jaw of sacral cornua
projecting  bilaterally,
grunts angrily
and snuffs out the imaginary flame
at the apex
bringing the bone to its end point
abruptly.

A photograph
of a snow owl
taken in a hurry
as it slowly head-banged
to the song,
“I wanna be yours”
by Arctic Monkeys.
Then put in a picture frame
between sacroiliac joints.
A curved bone
adorned with corn rows,
composed of  median,
intermediate and lateral sacral crests.
Galen’s strong bone.
Sacred bone.
Sacrum.
Written by – Dr. Chris Vincent, MBBS 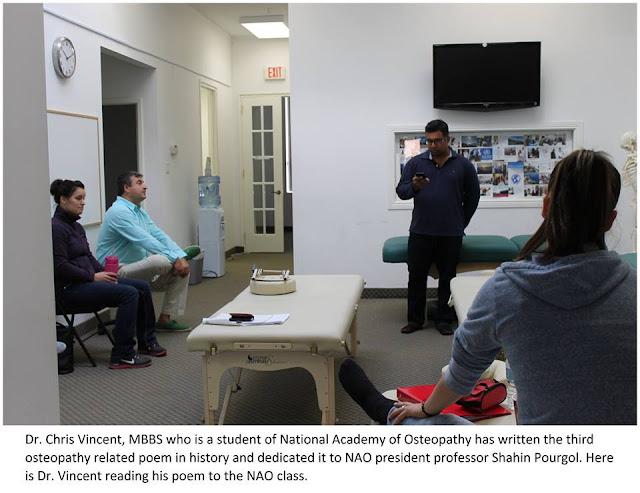 Posted by National Academy of Osteopathy at 12:24 PM No comments:

Are you a newcomer to Canada?

Immigrants to Canada are now eligible to receive $1000 in scholarship to study manual osteopathy at National Academy of Osteopathy.

This is a non-repayable financial aid available under the Canadian Immigrant Employment Program (CIEP).

All immigrants (including those from India, Iran, Pakistan, Sri Lanka, Bangladesh, Egypt, Iraq, China, Hong Kong, & South Korea) ages 18 and above are eligible to apply for this scholarship.

This financial aid is offered as a grant, not a loan, meaning students do not have to re-pay it.

You are eligible for the Canadian Immigrant Employment Program only if you are unemployed, or have an annual income of less than $30,000. This scholarship is available only to those immigrants who entered Canada in the past 15 years. Immigrants who arrived in Canada prior to January 01st, 2000 are not eligible to apply for this scholarship.

National Academy of Osteopathy offers a DOMP (Diploma in Osteopathic Manual Practice) that can be completed in 12 months, 100% online across Canada.

Those students interested to study in-campus can attend the York University Heights campus of NAO in Toronto. Optional practical technique classes (for online students) are provided in Toronto and elsewhere.

Students with previous health education (such as doctors and physiotherapists) can enter the accelerated program and graduate in 6 months, instead of 12.

NAO has graduated many manual osteopaths in Canada in the past 5 years. Our Canadian alumni are permitted to work in all Canadian provinces, American states, and all European countries. You are eligible to open your own manual osteopathy clinic in Canada upon graduation or you may seek employment in other clinics and medical centers as a manual osteopath.

NAO is the only manual osteopathy college to be accepted as an affiliate member by the Ontario Hospital Association.

Our students are also eligible for full scholarships from the Metis Nation of Ontario and the WorkBC program of the Canadian government.

Canada Revenue Agency gives up to $5000 in tuition and textbook tax credit to students to study manual osteopathy at NAO.

Manual osteopathy is one of the top 25 professions in Canada as reported by the CIBC. There is zero unemployment in this profession. Average income is $90,000/yr. New graduates are usually hired at $30 per hour.

A 2012 survey indicates that manual osteopathy is the #1 choice of Canadians for low back pain relief as compared to physiotherapy, chiropractic, massage therapy, acupuncture and medication.

To receive our information package please send an email to admissions@nationalacademyofosteopathy.com. 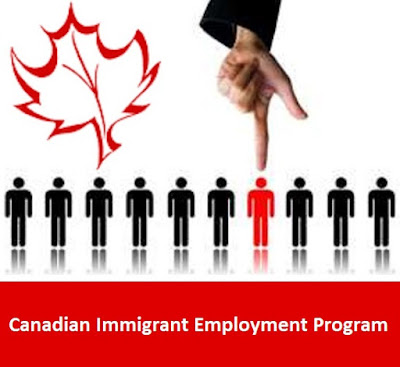 Posted by National Academy of Osteopathy at 5:59 PM No comments:

NAO Student Testimonial from BC

I Know thanksgiving just passed but I would like to give thanks for Manual Osteopathy and NAO for the opportunity that gave me to improve my self and to help others!
I hope everyone had an amazing thanksgiving! 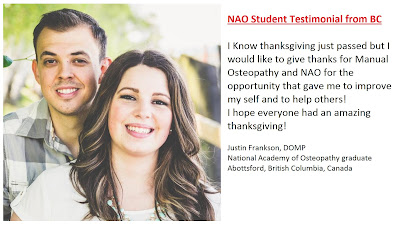 Posted by National Academy of Osteopathy at 3:28 AM No comments:


Since the beginning of the osteopathy profession there were only two poems published, the last one by National Academy of Osteopathy president, Dr Shahin Pourgol.

This poem is about a side posture technique that was recently taught in the technique class of NAO in Toronto located at the York University Heights campus.

Dr Vincent is an artist. His osteopathy related paintings will be available in 2016.

Lola lay supine
on the forest-green table.
A delicate dandelion
lying on a patch of grass.
Sunlight filtered through
the skylight above
bathing the osteopathic
manual therapy room
with a bright glow
of hope and possibility.
Dante positioned himself
by the side of the table,
his personal battle-field.
He prepares for the fight
against pain
and restricted movements,
lingering
between muscles and joints.

For a fleeting moment,
patient and the therapist speak
with words of silence.
Then Lola points to her lower back
with red, painted nails.
Her delicate features
crumpled into anxious lines
on her beautiful face.
Dante nodded
and spoke in a soothing tone
as he directed her to lie on her side
facing him.
He bends her knee
to and angle of 90 degree
and supported it against his strong thigh.
Then he leaned over
and locked her shoulder.

Thick blue clouds
hovering over misty mountain peaks.
He leaned over
Casting a shadow:
a deep valley across the table.
Like gathering rain clouds
over the garden.
A sleek cat climbing
across a window sill
and stretching its torso
to clear the edge.

He places the heel of his palm
over her lumbar region.
Skin on skin.
The human touch: a kiss to the senses.
Muscles roll like clay
as Dante takes his turn
meticulously exerting precise pressure
on her transverse processes.
All the while his elbows pointed out
parallel to the table.
Lola arches her back forward
caught under the spell
of the osteopathic technique.
A  lithe bow curving against
the strength of a sharp arrow.

A painless click is followed
by a silent pop.
Pain had left the body
like a ghost.
Lola felt a sense of comfort
washing over her.
Dante reversed his posture
and stood up tall
by her side
shining in the light.
She thanked him
with words
that fluttered like leaves
floating from trees,
in the Fall. 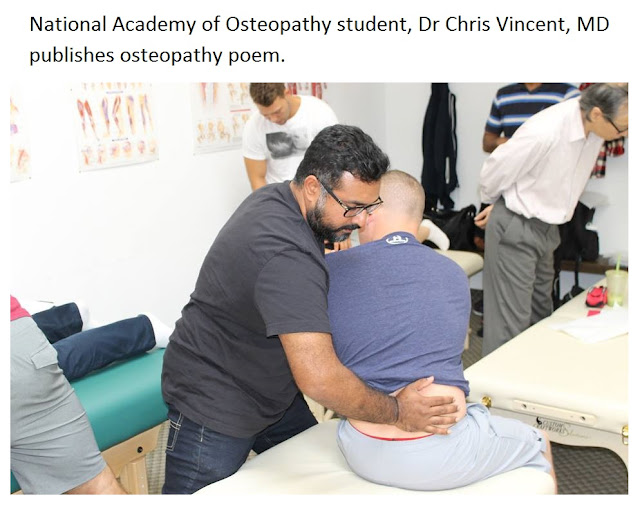 Posted by National Academy of Osteopathy at 3:32 AM No comments:

National Academy of Osteopathy
Toronto, Ontario, Canada
National Academy of Osteopathy (Canada) and its two sister schools, the National University of Medical Sciences (USA) and National University of Medical Sciences (Spain) are the largest providers of manual osteopathic education in the world, with alumni in 69 countries. NAO offers on-campus as well as online osteopathic education.